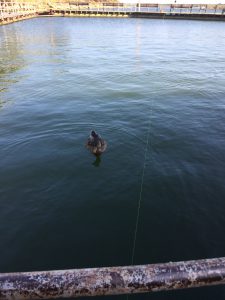 I try to go fishing for a few hours every weekend.  This post will give a quick recap of how it went and I will also share some summertime crappie fishing tips along the way.  As I have mentioned, I live in north Texas.  We have had some record heat (no seriously!, it has been hotter than the usual hot summers to the tune of 110 degrees a couple of weeks ago).  I have had limited luck in the heat but I refuse to stop fishing!  It is my therapeutic getaway and I still get excited every weekend in anticipation!!!!!

During the summer I usually fish the local and not so local barges.  In the absence of a boat, barges and docks are absolutely fantastic.  Most barges have trees that are sunk all around the periphery.  The one I go to has been around since the 60’s and they are very diligent in sinking trees all year round (but mostly after Xmas).  This creates fantastic habitat for crappie.  The Barge is huge and depending on where you are fishing, the depth can vary from a few feet to as deep as 20+ feet. I always buy a couple dozen minnows and bring the 3 poles that are allowed.  I never fish inside.  I always fish the walkways that surround the barge.  I can walk miles in 3 to 4 hours jigging and looking for crappie. 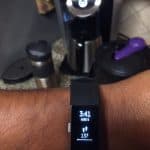 I always prepare the night before.  I get all my poles ready and in the car.  I load up my backpack, a cooler and another styrofoam cooler with miscellaneous gear. In the styrofoam cooler I have things like a cast net, a pair of hook removers, some Danny Kings punch bait for catching catfish and miscellaneous smelly stuff (it stinks).

I load up the trunk with everything so I am ready to roll in the AM.  I get my coffee maker ready and my water jug (did I mention its hot?) ready and on the kitchen counter.

I woke up this sunday at 03:30 because I was so excited to go fishing I could not goo back to sleep.  I got my coffee and water ready and headed out the door.

I started with minnows and did not get any bites for a while.  I tried different depths and different locations but no joy.  I had to load up on bug spray because the barge lights were just above me and bugs were all over me.

I am very familiar with many of the regulars and everyone was saying that it was very slow.  There were a few guys that had been there all night and reported that the bites had stopped at around 2300 and that things were dead.

It is actually not unusual for the crappie to be fairly quiet at this time.  We pretty much all get there early so we can secure some space before the other fishermen/women (who are not hardcore like us) show up.

We all know that the crappies start biting at around sun up.  in this case it was around 0600 AM.  By 0545 I had a few small sandies inhale my minnows and I was ready for the crappie to start biting.  They did not dissappoint.  As soon as it started getting light, they started striking.  It is funny because you see the other fishermen/women get hits all at the same time almost all around the barge.

I had 3 poles in the water and I had action on all of them.  I caught about four or five in the next 45 minutes.  All of them were shy of 10 inches so I threw them back.

As I mentioned, there are a lot of regulars that frequent this barge.  Over the years I have gotten friendly with most of them.  We talk crappie and discuss different techniques year round.  I always try to listen and pick their brains.  I almost always come out with some knowledge that I did not have a few hours before. This time was no different as I did pick up some summertime crappie fishing tips.

At the barge in the summer, the crappie quit biting aggressively at around 0900.  That is not to say they stop completely.  I was having some pretty decent success. One of the regulars who is exclusively a jigging crappie fisherman was also having some success.  There were a few newbies around us and they were not having the success we were.  Let me say that I caught about 13-15 crappies that morning and only 2 of them were keepers.  I still consider that a pretty successful day since I had a lot odf action and had lots of fun (I also caught three sand bass and one catfish).

One of the newcomers was trying to emulate the jigging old school guy.  He was also trying to fish right next to where I was.  He finally asked  what we were doing because he was having zero bites while we were doing pretty good.

Here is what we told him:

When fishing the barge in the summer, look for shady spots.  These spots will basically migrate as the sun moves across the sky.  Crappies are ambush creatures and they like to attack from the shadows. It is also very hot and just like you and me, they prefer the shade.

Go deep.  I have read several articles that state that crappies are not deep in the summer.  That may be the case in the lake that the authors are fishing, but it has not been the case for me in north Texas.  I catch all of my crappie at 12 feet down and deeper. it’s cooler and darker down there.  The crappie can ambush their prey and feed up as they are known to do.

Here is an article I wrote about deep water crappie techniques

My jigging friend was using a 1/32 oz jig head with a natural color plastic body.  The plastic lure was extremely small and white.  He indicated that he had been fishing that weight of jighead and small plastic crappie lure for the last two months because the crappie “were finicky”.

Let me tell you he was killing it!  He was pulling crappie out every few minutes.  He was fishing a small crack between the deck and the barge wall.  The gap is about 8 inches.  He was using a 5 ft (or close to it) ultralight rod.  It seemed that as soon as he dropped the jig, he was getting a bite and a catch. 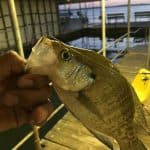 When you find your depth, stay at it.  Me and the jigging regular use the same technique.  We find our depth and basically never reel in.  We pull the line with our left hand and use our thumb on the right hand (rod holding hand) to keep the line from dropping back in the water.  This way we are always at the same depth that we caught the last crappie at.

Since crappies like to school in the same general vicinity and depth, this technique ensures that you are always at striking depth.  This technique can be messy. The first few times I tried it I made a huge tangle of my line.  Today I can do this  without having any troubles at all, even if the line is 15 to 20 feet down.  It just takes practice.

When fish are “finicky” like the jigging man said, the 1/32 jig head is perfect.  It is light enough to drop extremely slowly.  This slower drop keeps the bait in front of the crappie longer.  In addition, the jig head was light enough in this case that the current was taking it under the barge itself.  Under the barge is even darker and cooler.  This explains why he was getting so many more bites than everyone else.

I gave the new guy a few 1/32 jig heads and some small bobby garland lures.  I did not stick around to see how he did.  I had 2 keepers on my stringer and gave them to the jigging guy.

I HAD A BLAST

I ended leaving just after 1000.  I had a blast as I always do when I am fishing.  I learned a lot from the veteran fisherman and had a great relaxing and fun time.  By the time I left, it was getting up there in temp so it was perfect timing.

I hope you all enjoyed this post and the pics that I took.  I will try to do a few of these posts once in a while.