Crappie are among the most popular North American game fish. Many anglers enjoy the challenge that comes with fishing them. They are also one of the tastiest pan fish, so that only makes them even more popular. The fact that they can be found in almost all the waters throughout the continent is also another plus.

This article will focus on crappie fish facts. It will outline all the basic info you need to know about this fish, to help you have a good understanding of what exactly it is and how it behaves. With this information, you can become a more effective crappie fisherman, able to catch your limit every time you head out.

The crappie is a North American fish that is a member of the sunfish family. Crappie are a very popular game fish, perhaps because they make really great fillets.

There are two main subspecies of crappie: white and black crappie. However, sometimes, you may catch the rarer grey crappie. The grey crappie is simply a product of the interbreeding of black and white crappie, and it possesses qualities from both parents in varying degrees.

Crappie are exclusively fresh water fish. They can be found in ponds, creeks, lakes, streams, rivers, and sloughs throughout North America. They are known by many names, including speckled bass, sac-a-lait, strawberry bass, calico bass, and papermouth, on account of their fragile mouths.

As aforementioned, there are two types of crappie- the black and white crappie. The name crappie is the general name that is used to refer to either the black or white crappie.

The two species tend to have similar habits despite their differences. So it is possible to catch a black crappie in the same waters you caught a white crappie.

When it comes to their similarities, they look almost exactly alike in shape and size. They both have a long upper jaw that reaches a little past the middle of the eye. They also both have laterally compressed bodies with large mouths.

The weight of an average crappie ranges from 0.5 to 1 pound. Full grown crappie can weigh up to 5 pounds, but finding one is very rare.

Crappie measure from 5 to 12 inches on average, but could grow much larger. White crappie can reach lengths of around 20 inches at maturity while black crappie grow to 19 inches.

DIFFERENCES BETWEEN THE BLACK AND WHITE CRAPPIE

Here is a more detailed look at the differences between the black crappie and the white crappie:

– Black crappie are shorter and wider than white crappie which are longer and thinner.

Here is a pretty cool resource about crappie and crappie fishing.  I live in Texas so I refer to the state parks and wildlife resources a lot.  This is a good one!

Crappie are very social in nature. They form and live in schools. This means that if you come across one crappie at a specific location, chances of finding more crappie around it are very high.

They feed at dawn and dusk and remain less active during the day. They feed on insects, zooplankton, small sunfish, crustaceans, other fish, insect larvae, and minnows. Of these, minnows are by far their favorite meal.

During early morning and late evenings when they are active, they tend to move into open water or approach the shore. Interestingly, they do not go into hibernation in winter like most other fish. Instead, they remain active and continue feeding under the ice. The fact that they stay active throughout the winter makes them great for ice fishing.

Crappie are nest builders and mostly nest in the spring because of the warm temperature. During the spawning season, they move to shallower waters and can be found building their nests in as little as 1 to 6 feet.

Crappie fish typically spawn during spring between May and June. The ideal spawning temperature is between 58° to 68°F. They spawn in three distinct stages: pre spawn, spawn and post spawn.

In the pre spawn stage, the males move to the shallows to begin nest construction while the females wait some distance away in the deep. The male crappie constructs a nest by clearing gravel, sand or mud from the water bottom and making small depressions on the floor of the water. All this is done before the female arrives. The nests are constructed around vegetation, brushes, and rocks and are usually between 1 and 5 feet deep.

When the female arrives, it marks the beginning of the spawning stage. The females lay between 5,000 and 40,000 eggs on average, although they can lay up to 180,000 eggs in one spawn. Immediately after laying her eggs, the female crappie leaves the shallows and heads back deeper into the water.

Crappie eggs take 2 to 5 days to hatch. After spawning, the male crappie is responsible for guarding the eggs and the young until after they are hatched. This is the post spawn stage. Newly hatched crappie appear translucent. They usually stay in the nest for a few days before finally moving to shallow waters.

Crappie are very fertile and if not properly controlled, they can quickly over populate small water bodies. If they inhabit a lake, it is vital to maintain the right predator-prey balance.

Crappie live in freshwater bodies with plenty of rocks, weeds and brush. They prefer slow moving water, but they can still be found in some fast moving streams and rivers.

Generally, they live in deep water during summer and winter, and occupy shallow water in the spring. This means that you should fish shallower during winter and spring and fish deeper in the summer. The reason for this behavior is simple: crappie love comfortable temperatures. When it gets too hot or too cold on the surface, they move deeper to seek out better temperatures.

Crappie can be found in most water bodies in North America, including ponds, lakes, streams and sloughs. They thrive in clear waters that are highly vegetated and averagely acidic.

The black crappie prefers clearer waters while the white crappie prefers its waters to be a bit turbid. However, both subspecies prefer areas with some structure, so when searching for the best places to find crappie, always go where there is lots of brush. The reason for this is that crappie love eating minnows, and minnows hide around brush and weeds.

This applies almost universally, making it a crappie fishing rule of thumb. Crappie will always go where the minnows are. So if you can locate the minnows, you will find the crappie. 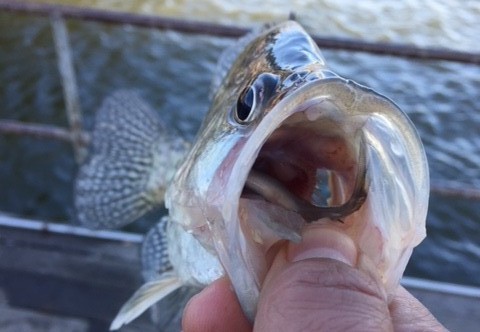 Yup, that is a minnow in the crappie’s mouth in the photo above. I took it a few months ago 🙂

Crappie is both a predator and prey. After hatching, the young crappie feed on insect larvae and zooplankton. As they grow, they then permanently switch to eating small sunfish, insects, insect larvae, minnows, young shad, and crustaceans.

They also feed on their predator’s young. Crappie predators include the walleye, muskellunge and northern pike. The predators play such an important role in the crappie’s lives, even going as far as influencing their feeding habits and movements. For example, although you might expect to find crappie closer to the surface in spring, if there are predators nearby, the crappie will move to deeper waters despite their own discomfort.

Crappie feed very early in the morning and late in the evening. They also go hunting at night, between midnight and 2am. Their feeding times are the best times to catch them because they are blinded by hunger and will attack anything they see, including your bait and lure. Therefore, depending on the season, dawn, dusk or night fishing might be the most effective.

OTHER INTERESTING FACTS ABOUT THE CRAPPIE

– The oldest recorded age of crappie is 15 years. They however have an average lifespan of 8 to 10 years on unprotected waters. This increases if they are in sheltered waters or in captivity.

– Crappie are aggressive and tend to bite during the period before spawn. This is because they feed heavily before spawning. They seem a bit calm the rest of the time.

– Crappie sometimes school with some types of pan fish. A great example is bluegills. When crappie and walleye are found in the same habitat, there’s a lot of competition between them because they have similar feeding habits.

– Crappie have an average length of 10.8 inches. The maximum reported length of a black crappie is 19.3 inches and that of a white crappie is 21 inches.

– During spawn, the female crappie can spawn with different male crappie in more than one nest.

– The white crappie are more widely distributed throughout the continent when compared to the black crappie. 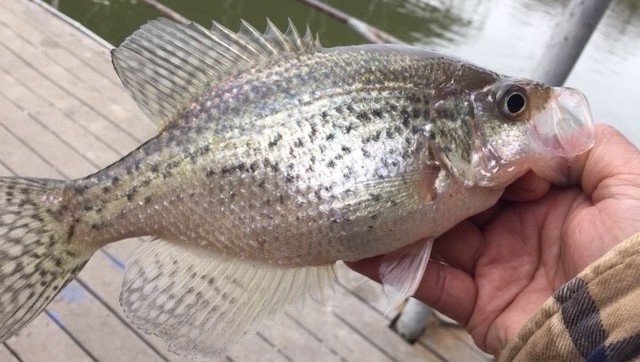 So there you have it. Everything you need to know about crappie. When you combine this information with other crappie fishing tips and tricks that I have written about here before, you will soon be a very effective crappie fisherman, catching your limit every time you head out. As a final surprise, I have put together this handy crappie fish facts Infographic. Please feel free to refer to it whenever you need to. Also, please feel free to send it to your crappie fishing buddies if you think they would find the information helpful.

As always, please let me know if you have any questions or if you would like any input to the information i have presented. You can do both by leaving your comments or questions below. I look forward to hearing from you soon!

Good Fishin’ to you!